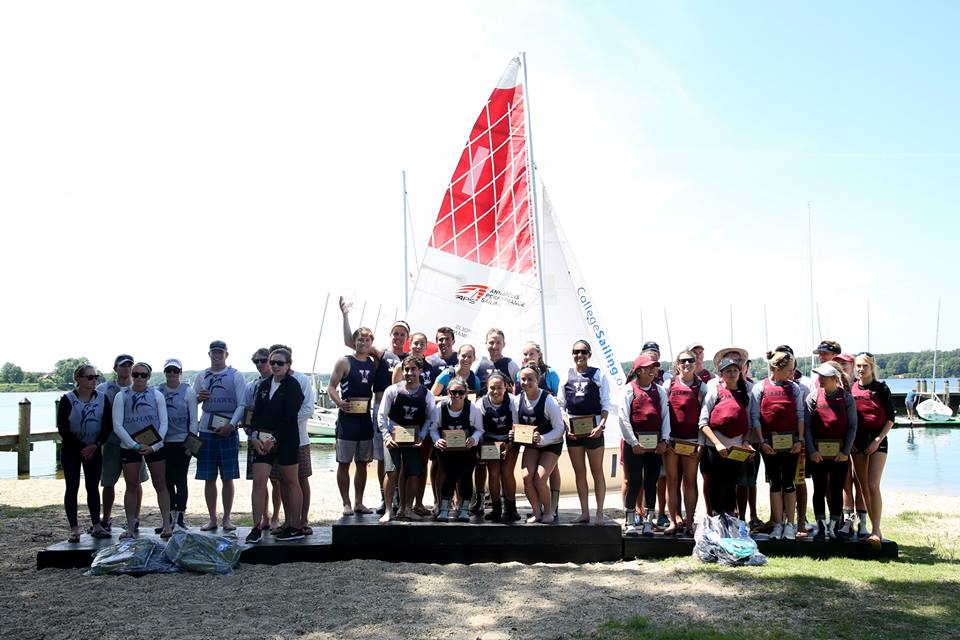 The day began with completing the top eight round robin. Racing got underway around 9:30 a.m. Competitors sailed in FJs on digital N courses. The remaining ten races were completed in the top eight round today. The morning conditions were sunny, temperatures in the 70s and winds from a southerly direction at around 5-10 knots.

Principal race officer, Chris Gaffney, was methodical making sure to run the races efficiently and taking the time to make sure the course was square so that the sailing was fair. He and the race officials ran 154 total races in this event.

Today the teams were fighting to advance into the final four round. The competition was tough and the sailors were working hard on the racecourse. Yale made it through the top eight round undefeated, with only one loss on their record from the very first round robin of the regatta.

Before Yale sailed their last race in this round they had clinched the regatta win. Once they had their 20th win in the event, they mathematically won, even before the final four began. This is the first time this has happened in at least eight years and it may even be the first time a team has clinched a national win so early on in the regatta. Still, the racing continued and after some real battles on the racecourse, the final four were decided.

“Since we were just taking it race by race it just kind of happened [clinching the regatta],” says Bill Healy, assistant coach for Yale University. “The team is totally psyched and everybody is happy – the regatta was so awesome, it was perfect,” Healy says of their win.

“I am really happy for the team. They worked so hard for it all spring and Zeke Horowitz, who helped us a lot, was a key contributor to this win,” Healy explains. Healy also gave a shout out to the hard work of St. Mary’s Sailing head coach Adam Werblow and Chris Gaffney and his crew, “They were so incredible and efficient and patient when they needed to be. It was the smoothest team race event I have ever been to,” he says.

By lunchtime the top eight racing was complete and after a short break the final four round began. Yale advanced into the round with Stanford University, St. Mary’s College of Maryland, and Boston College all tied with a 15-7 record.

There were six races total in the final four. The temperature was up around 75 degrees and the winds were a steady southerly around 7-11 knots. St. Mary’s and Stanford came out of the gate strong and won their first races in the round. Stanford gave Yale their second loss of the regatta. This momentum carried them through until they had to face each other to determine who would take second place.

Stanford started the race winning and was ahead almost all of the way around the course, but St. Mary’s started to make gains on the Stanford sailors and eventually chipped away at them up the last beat of the race and crossed the finish line with a winning 2,3,4 combination. St. Mary’s continued to be undefeated in the final four.

This is the third year in a row that St. Mary’s has placed second at this championship.

“We had a really hard time starting today and had to play catch up in almost every race,” says Adam Werblow, head coach for St. Mary’s. “But the team was a team and the guys have been together now for a long time and really battled and it was fun to see,” he says.

“Bill [Healy] did a great job getting fired up and wanted to do their absolute best in the final four and without a question Yale was dominant and they should have won. Everybody else was really close and we were fortunate to come out in second place again,” Werblow says.

This is the first time since 1996 that Stanford has finished on the nationals’ podium.

“It means a lot to the West Coast, to our conference and especially to Stanford to get back on the nationals podium,” says John Vandemoer, head coach for Stanford. “I am proud of these guys for so many things,” Vandemoer says about his team and especially the seniors. “It’s incredible what the seniors have done both on the water and off the water to really lead and establish Stanford as a powerhouse in college sailing. I can’t say enough about their support and all of their work,” he continues.

“Big shout out to our two captains, Yuri and Hans, they have really lead this team all year. The team racing is tough, everyone is good and it takes strong leaders to make it happen,” Vandemoer says.

To view or purchase photos from today’s racing and awards visit: www.ebrianschneider.com.

Racing continues tomorrow in the Gill Coed Dinghy National Championship with the first day of Semi-Finals. The top 36 collegiate teams in the nation have qualified to compete in this stellar event. The competitors’ briefing will be held at St. Mary’s tonight at 6 p.m. and the first warning for racing is tomorrow at 9:30 a.m.

Live coverage, sponsored by LaserPerformance, will continue tomorrow with highlights and updates. Click on “Live Coverage” on the event website (http://2014nationals.collegesailing.org/) for these up-to-date racing details. Social media coverage will be provided on collegesailing.org.

Gary Jobson and Chris Love will be filming portions of the Championships for an ESPNU segment, which will initially air on July 13.

The Inter-Collegiate Sailing Association (ICSA) is the governing authority for sailing competition at colleges and universities throughout the United States and in some parts of Canada. Visit www.collegesailing.org to learn more.