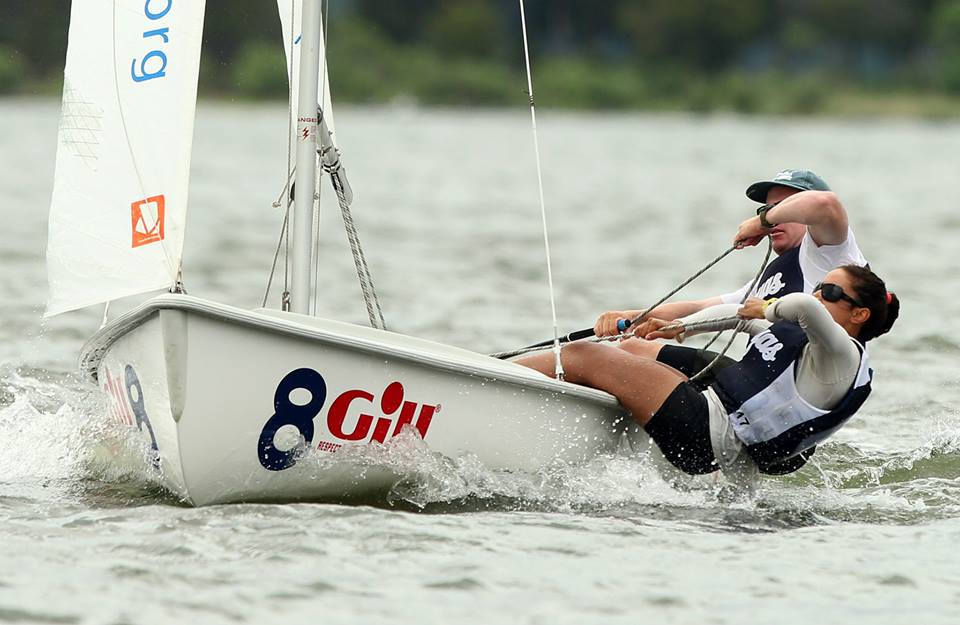 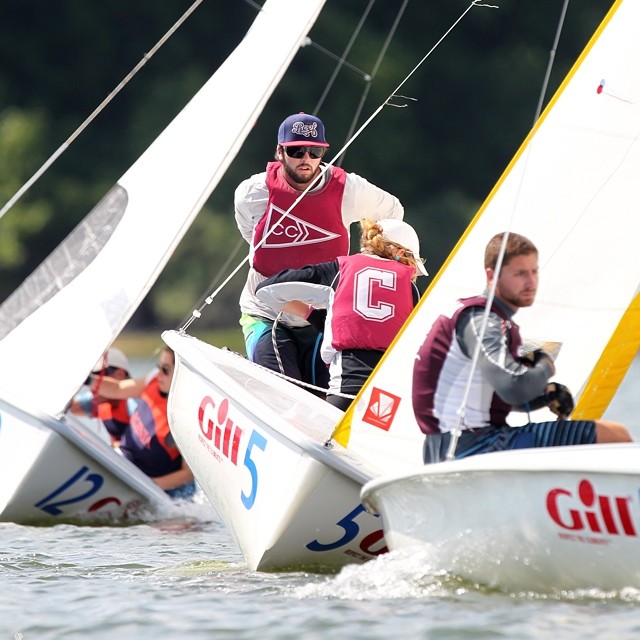 St. Mary’s City, Md. (June 6, 2014) – Today was the last day of the Gill Coed Dinghy National Championship, hosted by St. Mary’s College of Maryland. This is the last of three high caliber spring College Sailing National Championships, where were co-hosted by the U.S. Naval Academy and St. Mary’s College of Maryland. After winning their semi-final fleet leading up to the finals portion of this event Yale University has won the national title and the Henry A. Morss Memorial Trophy.

Racing got underway at 9:15 a.m. Winds were from the northwest at around 5-8 knots. It was sunny and the temperatures were in the 70s. The wind started to shift to the north and get light. After completing a few races the race officials postponed the racing to wait for wind. After about an hour a westerly wind around 8-12 knots held steady and the racing started up again. Later in the afternoon the wind shifted 180-degrees to the north. It did not hold and there was not enough to complete more races before the 5 p.m. deadline.

Yale finished 88 points ahead of second place overall and won the Henry A. Morss Memorial Trophy, which was donated by a group of nationally known yachtsmen as a memorial to Henry A. Morss, a Boston yachtsman and 1907 Bermuda Race winner, as well as an MIT alumnus and benefactor.

“We tried to sail our own races for this event and sail smart,” says Bill Healy, assistant coach for Yale. “You couldn’t sail safe up the middle today or you would miss the shifts,” Healy says of the conditions today, “We looked to sail for the pressure closest to us and use our boat speed,” he says.

This is the second championship Yale has one in this spring series and Healy says, “Everyone is so excited and can’t wait to get home and share the good news with their friends.”

Sailing for Yale: Graham Landy '15 with Eugenia Custo Greig '14 and Katherine Gaumond '15 in A-division and Ian Barrows '17 with Amanda Salvesen '14 and Marlena Fauer '14 in B-division.

Georgetown University finished 45 points ahead of third place overall and won the Oxford University Trophy for the second year in a row. It is awarded to the second place team in the Gill Coed Dinghy National Championship. The Oxford University Yacht Club team and its captain Jeremy Thomas presented this trophy in 1954 on the occasion of the first of a continuing series of college regattas between British and North American teams held alternately in the United States and Great Britain every two years.

“We are happy to get second,” says Mike Callahan, head coach for Georgetown. “It was an extremely difficult regatta against the top teams in the nation,” he says. “It was difficult to be consistent and Yale did an amazing job,” Callahan says.

Sailing for Georgetown: Nevin Snow '16 with Katia DaSilva '15 in A-division and Alex Post '15 with Katie Olsen '15 and Bettina Redway '16 in B-division.

Boston College finished in third place winning the Metropolitan Sailing League Trophy, which was first presented in 1971. Boston College was in sixth place yesterday, but today they worked up the scoreboard to win a spot on the podium.

Sailing for Boston College: Raul Rios '16 with Shelby Hamilton '14 and Allison Ferraris '17 in A-division and Erika Reineke '16 and William Bailey '15 with Elizabeth Barnard '15, Christopher Dwyer '15 and Katherine Wysocki '15 in B-division.

The Robert Allan, Sr. and Robert Allan, Jr. Trophies are awarded to the low point "A" and "B" teams, respectively, in the Gill Coed Dinghy National Championship. Graham Landy '15 with Eugenia Custo Greig '14 and Katherine Gaumond '15 from Yale won A-division with 71 points, twenty-seven points ahead of second place. Ian Barrows '17 with Amanda Salvesen '14 and Marlena Fauer '14            also from Yale won B-division with 50 points, 57 points ahead of second place.

Gary Jobson and Chris Love filmed portions of the Championship for an ESPNU segment, which will air on Friday, July 11 at 7 p.m. ET, Saturday, July 12 at 4 a.m. and 9 a.m. ET and Sunday, July 13 at 8 a.m. ET. This will be the tenth time the Gill Coed Dinghy National Championships have been covered on ESPNU.

The Inter-Collegiate Sailing Association (ICSA) is the governing authority for sailing competition at colleges and universities throughout the United States and in some parts of Canada. Visit www.collegesailing.org to learn more.